A Journey of a Different Kind: Vocation and Devotion on the Feast of St. Gemma in the Middle-of-Nowhere, ID

This year's spring break brought many special opportunities.  After singing several days at the Cathedral of the Madeleine in Salt Lake City for the Triduum liturgies and for Easter Sunday, I was able to drive home to Portland to see my family and friends.  It was a short trip, but I managed to make the most of my time.  It was a very wonderful trip, but the most important part came toward the end of it.

I had to be back in Salt Lake City to sing for Mass for the second Sunday of Easter, meaning I had to drive on Saturday in order to make it in time.  This was disappointing to me because Saturday would be April 11, which is the feast day of St. Gemma Galgani, who has quickly risen through the ranks and become one of my special patron saints.  I have a devotion to quite a few saints, but for some reason I have a special affinity for Gemma and I always mark her feast day with more than ordinary fervor.  So to have to make an eleven hour drive on her day was a very disappointing prospect.  I was especially annoyed because I had this special St. Gemma candle I'd gotten at her shrine in Lucca this past summer, and I had planned on lighting it on her feast day.  I couldn't very well drive with a lit candle in my car (especially since my car has no cupholders).  And I had begun a novena to her that would end on her feast day as well.  I was describing this letdown to my friend CJ, who suggested that perhaps it may not actually be that bad and, in fact, may even be a good thing.  I therefore decided to modify my attitude and thus make the most of the day.  This change of attitude was pivotal.

In the past, on the memorial of St. Gemma, I would buy some flowers and set them up in my school's chapel or at home with one of her holy cards on display.  I usually buy pink carnations (or white with red edges like the picture on the right).  Pink is a combination of red and white, and I thought of white representing her purity and red symbolizing the pains she suffered as a result of her physical illnesses as well as the special privilege she had of sharing in the pains of the Passion of Jesus (including the stigmata).  As someone who shunned anything smacking of vanity and always wore plain, black clothes, perhaps pink was a bit much, but I appreciated the symbolism, so I stuck with it.

I thought that perhaps this year I might continue my tradition of buying the pink carnations but because I had no chapel to put them in, I would make a mini shrine somewhere along I-84 and leave the flowers there.  I had no particular inclination as to where I'd leave them, but I figured the afternoon/evening would be best so I could say Vespers at the shrine in addition to my other prayers.

The night before I had to depart, I went over to Fred Meyer (the Portland equivalent of Smith's for you Salt Lakers) to pick up the flowers.  While I was there, I made sure to buy a decent vase to hold the flowers and as I browsed the home decor, I decided to buy some votive candles.  I bought a tall red one and a tall white one, again going for the same symbolism as the pink roses.  As I went to go to pay for my items, I wondered at the amount of thought I was putting into this, which was honestly comparable to the amount of thought I would put into a date or a gift for a significant other.  I have to admit that one of my friends makes good natured fun of me for my devotion to St. Gemma by calling her my 'saint crush.'  I had to laugh at myself for buying flowers and candles with well-thought-out symbolism for a saint's feast day.

As I left the store, I felt the gravity that this feast day was going to have.  Just that day (Friday), I had turned in my completed application for seminary studies with the Archdiocese of Portland.  I have been discerning the priesthood for quite some time, and finally, finally, I have taken action and applied.  There is still much more to the process before I am accepted, but I can safely say that most of my part is done.  Having not been accepted yet, I am hesitant to count my eggs before they hatch, so I am cautious about saying that I will definitely be in seminary (especially since I have had a tendency to cry wolf in the past), but it seems pretty likely at this point.  I feel that St. Gemma has been a special advocate for me, especially with regard to my vocation.  It seemed fitting therefore, that I should be observing her feast day with extra solemnity now that I had finally turned in the application.

After I hit the road the following morning, it was sunny for little while until I reached the dreaded Blue Mountains.  There was a wall of cloud that, when I reached it, began to unleash it's torrid downpour, which wound up lasting all the way through the rest of Oregon and even into Idaho.  Where was I going to set up my shrine?  I prayed that the Holy Spirit would show me when I ought to pull off and and where I ought to go. 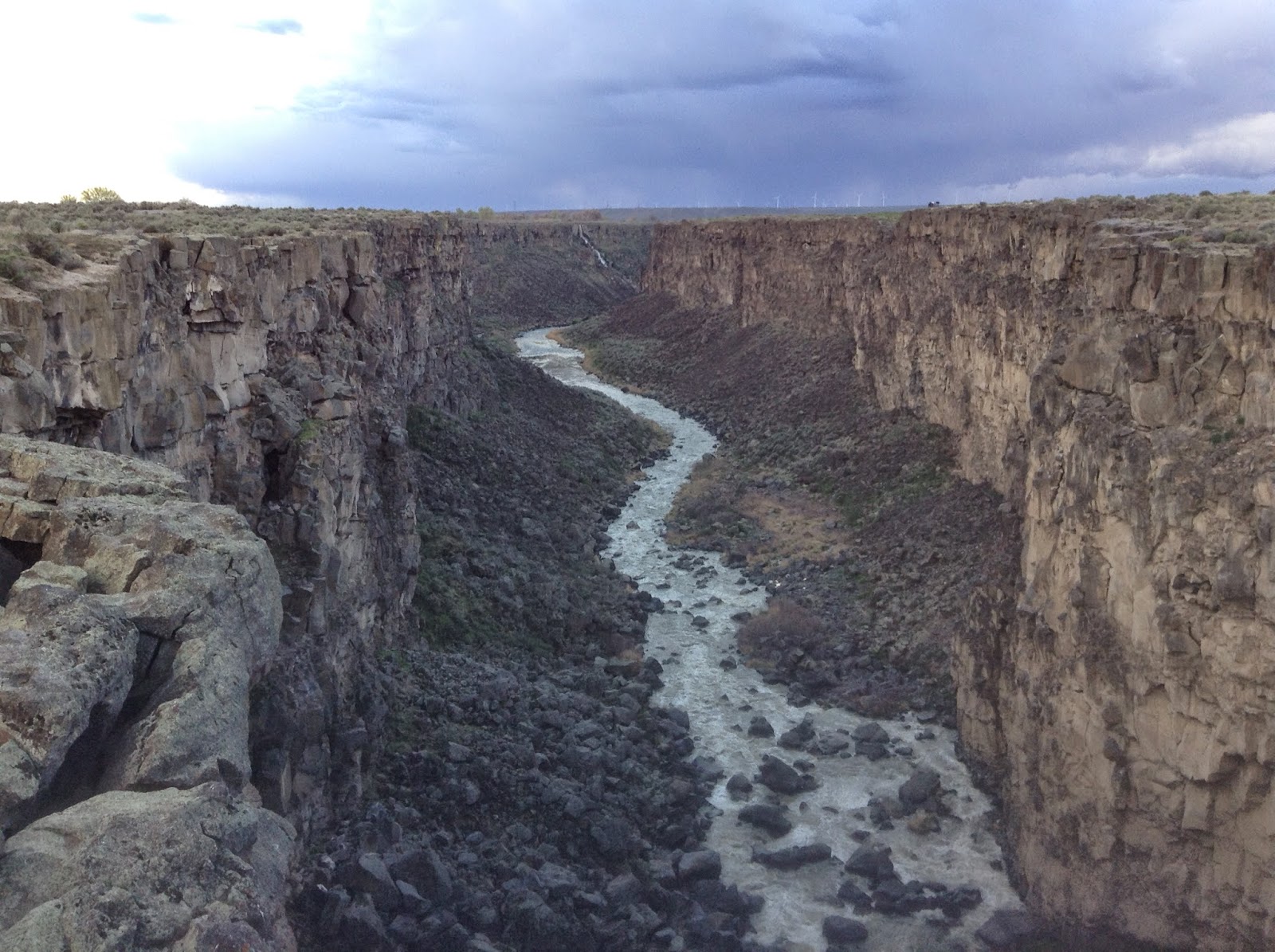 Sure enough, eventually the clouds broke and the sun shone brightly on Magic Valley, which is in Eastern Idaho.  There were clouds ahead in the distance, so I knew my time was limited.  As I drove along, I spied a canyon with lots of rock formations that had a very easily viewable parking lot nearby.  I immediately got off at the next exit (147) and made my way there, which was surprisingly easy.  I shortly found out that the canyon was called Malad Gorge and that I was near the town of Tuttle, ID.


As I hiked around looking for a suitable spot, I spied something underneath a large rock.  It was a tiny little mailbox.  Suppressing my fears that a creature of some kind lived inside, I opened the box.  After all, the little flag was up.  Inside was a plastic bag with various trinkets.  There was a tiny booklet of orange paper bound by duct tape, and inside it read, "Everyone please leave something. :)"  It appeared to be written by a child with a pen completely devoid of ink.  I had to really concentrated to
even read the impression left by the tip of whatever writing instrument had been used.  I scanned what other people had left.  There was a cigarette, a lighter, a roadside assistance business card, a punch card for Bandidos Mexican Grill (with 3 out of 6 punches), a quarter, a guitar pic, and a rubber stamp.  I felt like I had found a secret treasure.  I wondered how long this mailbox had been there and how long it would remain there after I'd left.  It wasn't particularly rusty, so I figured it hadn't been there for long.  After scoping out some potential spots for my shrine, I ran back to my car to get something to put into the mailbox.  I put in three things: a Bic pen, a copy of my signature Hoofprints of the Stag card from Magic: the Gathering, and a holy card of St. Gemma.  Perhaps whoever happened upon it next would find out who St. Gemma is and be brought back to God as a result.

After leaving the mailbox behind, I found a spot to set up my shrine.  Unfortunately, though the sun was still out, a heavy wind began to blow and I found it impossible to keep the candles lit.  It appeared that I had waited too long to set up my shrine, and now the weather would not cooperate.  Eventually I found a new spot that was relatively shielded from potential rain, but the wind was unforgiving.  I had quite a time trying to constantly relight the candles as I tried to pray Vespers, and then it even started to sprinkle a little bit.  One thing I can say is that those extremely thin pages in the breviary do not do well in moderate moisture.  Eventually, I was able to modify the candles and their position to keep them lit and steadfast.

As I prayed my Rosary there and my other St. Gemma prayers, the sun set and night fell.  The clouds that had plagued me earlier all but disappeared and the stars lit the night sky like the flames of candles at Easter Vigil, casting light on my bouquet of pink carnations.  After finishing my prayers and determining that I ought to get driving again to arrive home at a reasonable time.  As I walked back to my car, I spied the faint light of the three candles glowing, just barely visible.  I wondered how long they would stay lit.  Perhaps I will return there one day and see if my shrine is still there.  I contemplated the graces St. Gemma had received and it made me think of the generosity and mercy of God.  As we say in the Divine Praises, Blessed be God in his angels and in his saints!

When I got back to the parking lot, I learned from a sign that this particular spot was called Devil's Washbowl.  Not anymore, I thought, this place belongs to Gemma now, and therefore to God.
Posted by Luke Stager at 2:28 PM