Inspired by a Letter: An Adventure of Grandeur Hiking Grandeur Peak

Yesterday morning I returned to my home at about 1:00 PM after a morning at the Newman Center at the University of Utah.  I had planned for the day to go up to school and do some work so my Sunday would not be too crazy, but as has happened the last three weekends, the sun, the trees, and the outside were beckoning to me to become a part of them.  It would be a shame to miss out on what was clearly a grand day.  And so I sighed as I entered my house, knowing that I must banish from my mind the idea that I should put off my work to be a part of the outside.  That was my intent, that is, until I checked the mailbox.

In the mail was a letter from my friend Bob, with whom I had spent my time in PACE several years ago, and who has been living in Boston and was therefore snowed in his home for a few days with nothing to do but write letters to anyone who wanted one.  I had informed Bob that I indeed wanted a letter, and yesterday it fortuitously arrived and enchanted me with its typewritten font.  Even the typewriter periods had poked holes through the paper to the other side.

The last paragraph was what moved me the most.  I'd always known Bob was a good English teacher, but this letter showed me why.  At the end of the letter, he said:


Hope you're enjoying the ride and Utah's majesty hasn't gotten old, I know you're appreciating all she has to offer & every one of her darling sun rises or sun sets and the gnarl of her canyons and shapes, the distance of her sprawling into infinity. You're making me miss it--which is hard to do.  Oh Luke. Whisper into the wind on a mountain some time and know in that space your words are infinite and the universe is so thrilled just by your being in its space, in itself.

When I read that, my plans immediately changed.  I proceeded to change into a suit, procured a carnation from my 'boutonniere bouquet,' as I call it, placing it through the hole on my lapel, and put on my hiking boots.  I decided what peak I wanted to hike (Grandeur Peak) and set out of the house with an item one would not normally take on a hike (in addition to a suit): my viola.  Luckily, my case has straps that allows it to be worn like a backpack and a compartment in which I could store water and Clif Bars. 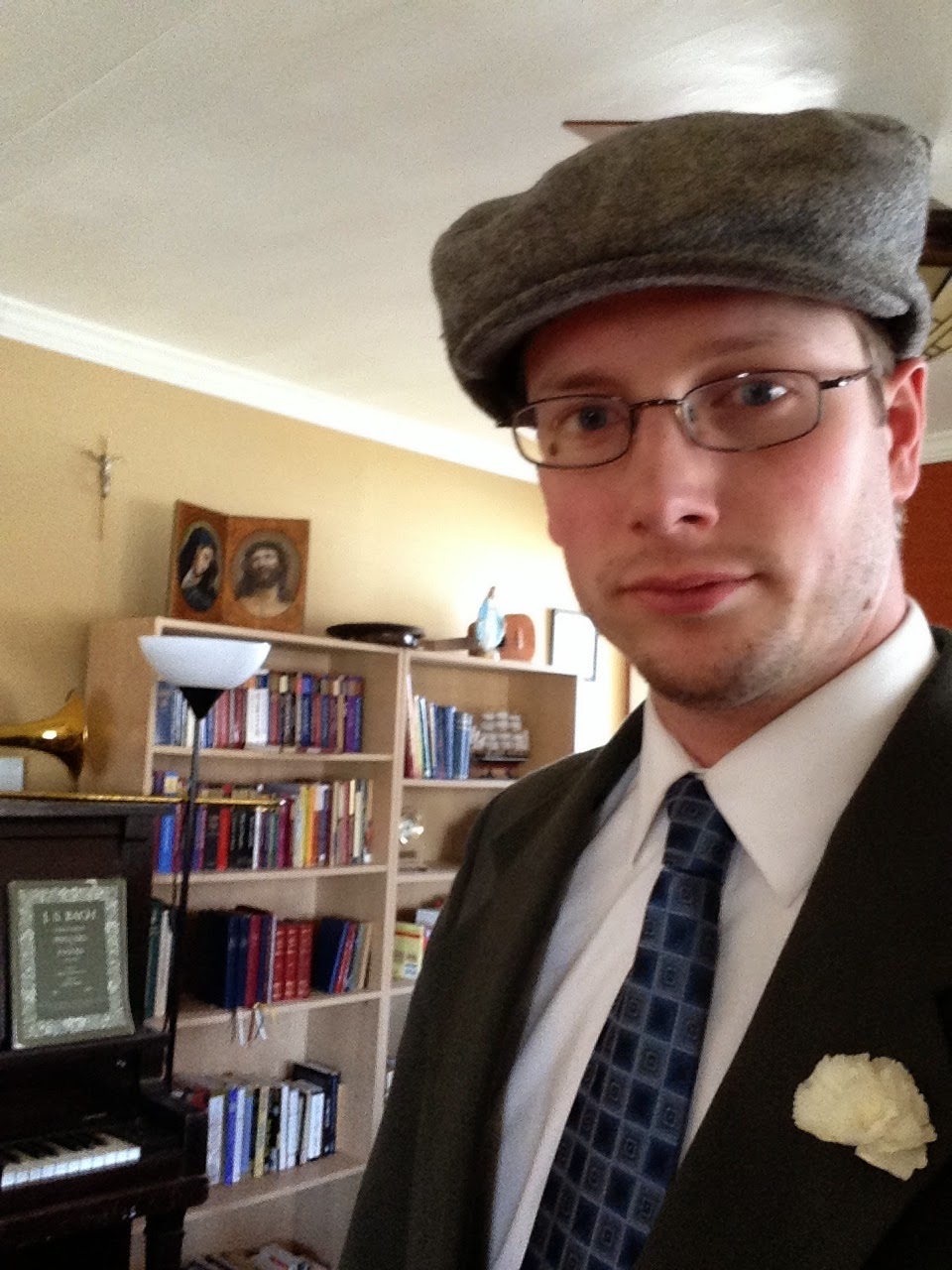 As I began the hike, I became painfully aware of how many people I was going to encounter on the way.  For some reason, I thought the trails would be fairly empty, but this was, of course, a ridiculous notion.  At first, no one appeared to pay any attention to me or to remark on my bizarre attire nor my musical instrument case strapped to my back.

The first people to stop and talk to me were a pair of middle aged women with a couple of dogs on the way down.  Like many people I would encounter, they asked what I was doing, wondering if perhaps there was going to be a wedding at the top of the mountain or maybe a proposal.  I shuddered at the idea of anyone having a wedding at the top of a mountain in the early days of February, but I politely said no, though I conceded that such an explanation made sense.  After all, why else would someone dressed in a suit with a white carnation and a musical instrument be going up to the top of Grandeur Peak? 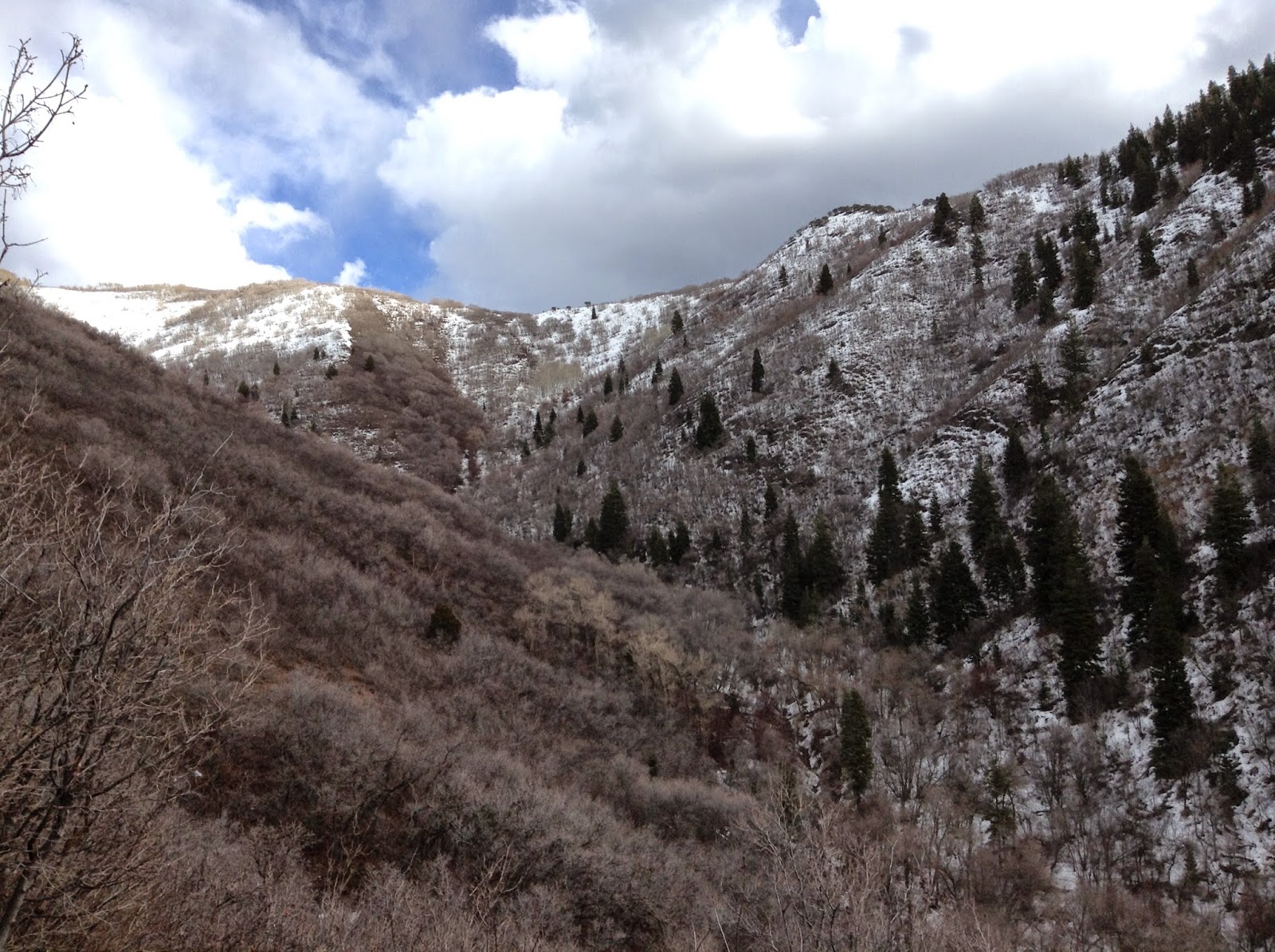 I simply told them that I thought today seemed like such a grand day and that such a grand day demanded grand deeds, and playing my viola at the top of a mountain in a suit seemed like a grand thing to me.  They applauded my efforts and lamented that they would not be there to hear me.  This encounter was like many I was to have throughout the day.

The going was moderate, but toward the top there was a lot of snow, and luckily my boots proved to be superior to it.  I encountered a couple who were resting for a moment.  Like many of the other folks I had encountered, they asked what I was doing (and whether it was for a wedding or proposal), and I explained about grand days demanding grand deeds.  They then revealed that they had been unsure whether they had wanted to continue to the top because of all the snow, but that now that they had a 'concert' to look forward to, it would be worth it.

When I actually reached the top, the sun was shining through the clouds in the west, and Bob's words echoed in my mind.  It was much colder than it had been down below, and to my surprise, I was actually alone.  I said a prayer or two, ate a Clif Bar and had a drink and pulled out my viola.  I began with Wild Mountain Thyme, followed by the tune Thaxted, which is also known as O God, Beyond All Praising and is featured in Holst's Jupiter.  As I wrapped up that tune, the hikers I had passed began to appear.

The couple who'd decided to go to the top after all arrived first.  The lady said I should get a minister's license and perform marriages at the top of mountains and make some money.  I shuddered to think that people would become ministers so they could make money performing strange weddings at the top of mountains, but I simply said, "That would be an interesting idea."  Another gentleman arrived and took pictures for us. 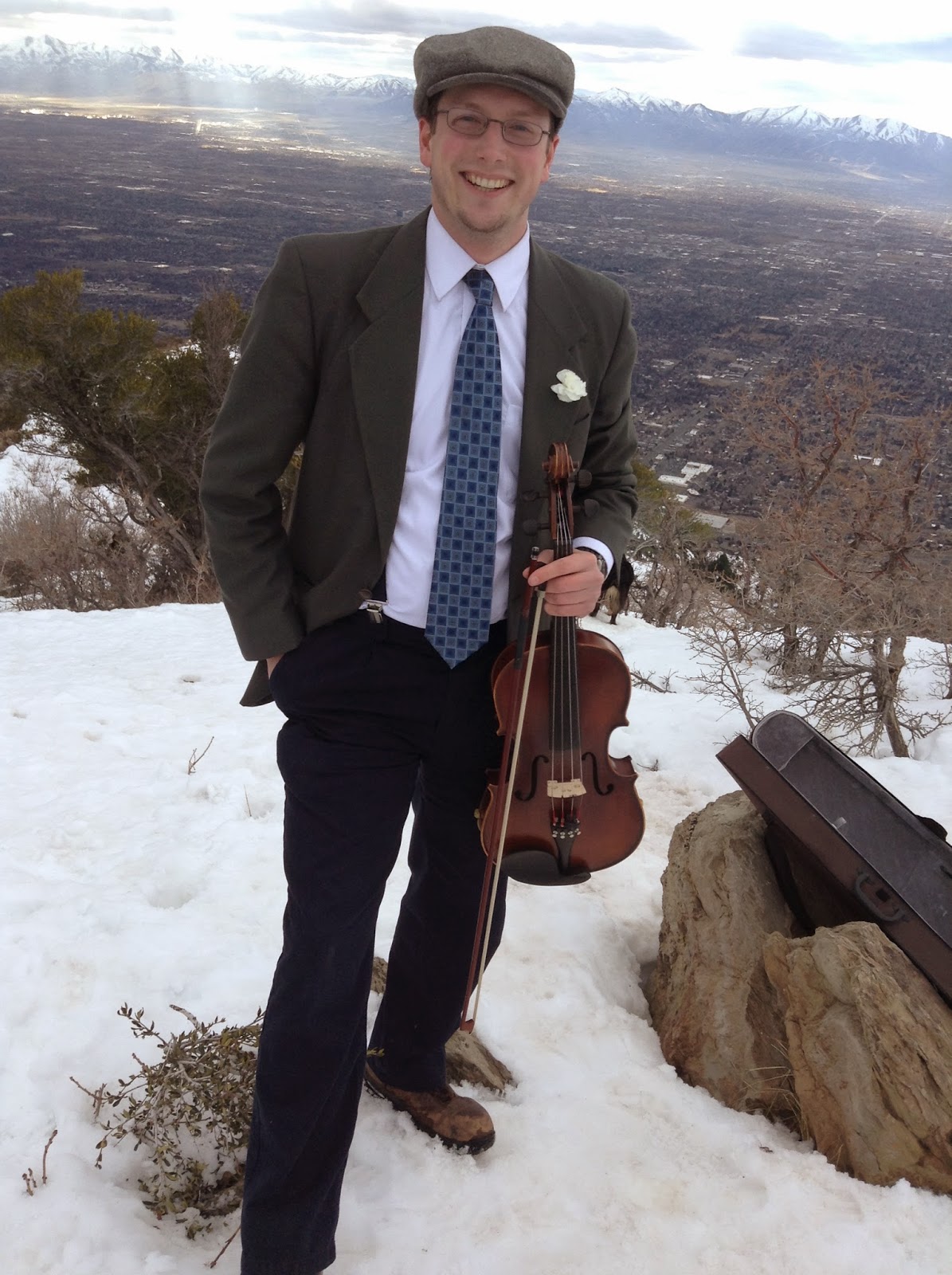 Another group reached the top and the girl in the group asked if I knew the tune of Greensleeves, which I then proceeded to play.  Another two gentlemen in state-of-the-art hiking gear arrived, explaining that they had been hiking along the Church Fork ridge for eight hours.  After I played a failed attempt at the Prelude for Cello Suite No. 1 by Bach (my hands were getting too cold), they said their eight hour trek was worth it just for that. 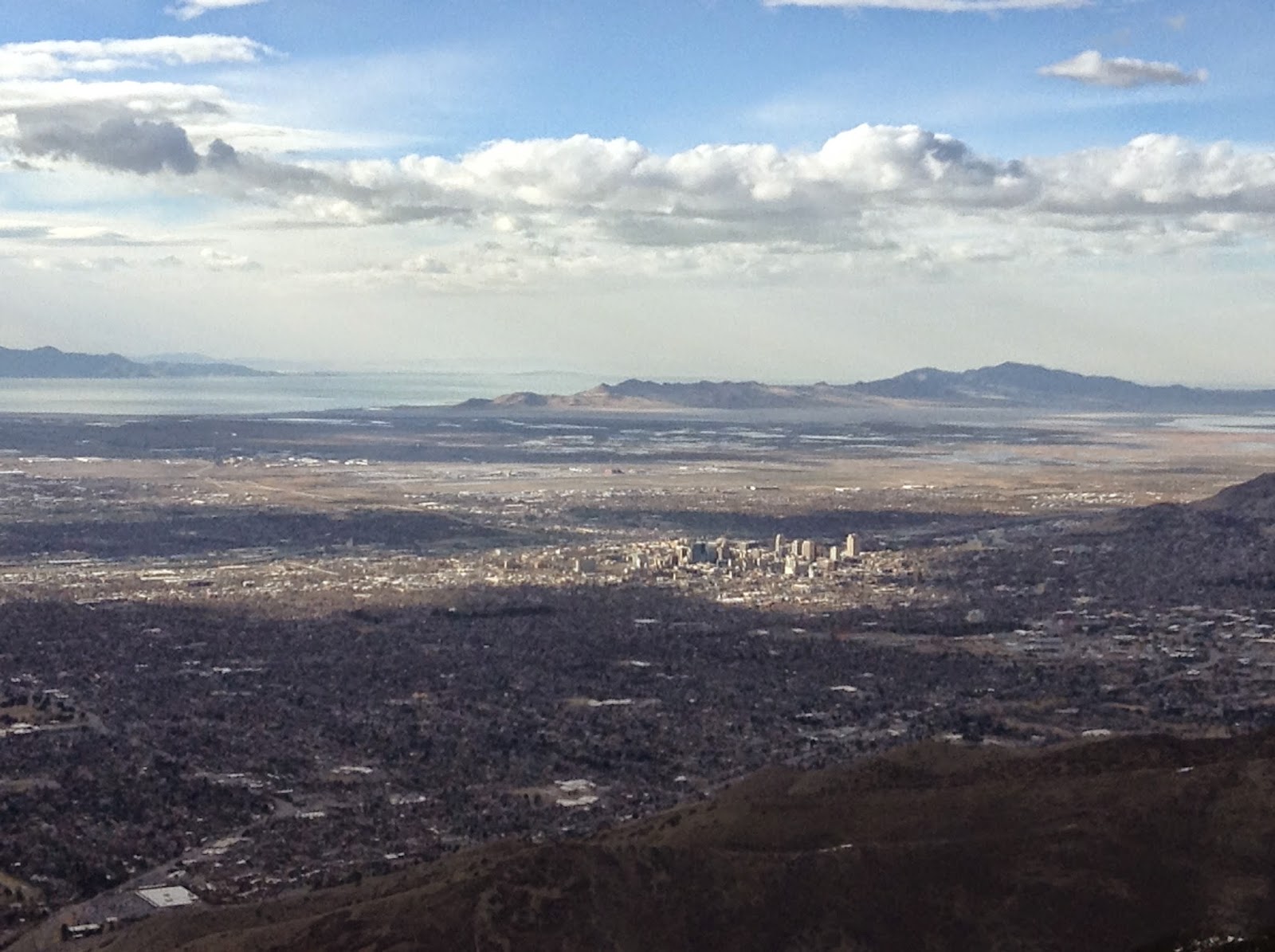 The final piece of the performance was Schubert's Standchen.  I couldn't execute the double stops I normally use, but it was definitely the best piece of the 'concert.'  The couple were the only people left, and they listened intently before departing, leaving me once again alone.  I regarded the Wasatch Valley below, crowned with the rays of the sun penetrating the clouds, just on the verge of sunset, said one final prayer, sang the Salve Regina, and made my way down.