What a joy it has been these last few days! I have been in Italy for almost four days, and it has been quite a whirlwind.  We arrived in Venice after a series of flights with very little sleep and were immediately thrown into the thick of things. It has been raining in Venice for several days in a row, and so the water levels are super high at high tide. There are walkways that lead everywhere so you don't have to walk in the water. Of course there are vendors everywhere selling these convenient plastic boots, but I wouldn't cave. It was a little crowded on the planks, but we made it work.


Some highlights from Venice: this first day was the only day on the whole tour we do not have to sing, and good thing too, because we were all super tired. We spent much time walking around the city and seeing the various famous spots. We got to go to this place where they sold Murano glass, and they had a little glass making demonstration where this guy made a carafe in like two seconds with what appeared to be no effort.  The students were all very impressed.  And then he threw what he made back into the fire as though it were not big deal. We went upstairs to look at what they sold and saw many similar carafes for many many Euros.

On Sunday, we got to sing in the Basilica San Marco, which has mosaics covering the entire ceiling. It was very impressive. It was really difficult space to sing in, but we did okay. It was nice to hear Mass in Italian again (though I forgot my book with the Mass parts in Italian). Later that day, the adults and chaperones got some time off while the parents came and took their kids out for the day. With my free time, I got to visit my friend Mandi (who I used to teach with at St. Joe's) and her family, who live at the US Air Force base north of Venice, and who Ed and I had seen this summer in Parma. I had let them know about our Mass at San Marco's and so they came and heard us, and then we went out to lunch and toured Venice for the day. It was really cool to see them again, and we had a lot of fun.

The next morning, we left Venice and passed through Padua. In Padua, we got to visit the Scrovegni Chapel, which had these very beautiful frescos depicting events from the life of Jesus and Mary, and this really cool fresco of the Last Judgement. Then I hopped a taxi over to the Basilica of St. Anthony and went and prayed a special prayer for my grandma at the tomb of St. Anthony, since she had had a special devotion to him (which also happened to rub off on me). It was really powerful to be before the actual tomb of a saint.

From Padua, we drove to Florence for the second leg of our tour. That evening we got to sing Mass at the Church of San Lorenzo for the memorial of St. Leo the Great. The sad thing about singing the concerts and the Masses in these churches is that we get precious little time to look around and appreciate their beauty, but I guess we see so much stuff that there is precious little time.

Which brings us to today, which began with some epic tours of various museums, starting with the statue of David. It seemed strange to start with David since everything else kind of paled in comparison, but oh, well. But I also got to have a cool adventure of sorts today. So it turns out that the author (Meg) of one of the blogs I follow (piercedhands.com), and with whom I was slightly acquainted (by way of prayer intentions) happens to be on a pilgrimage/speaking tour in Europe and by chance (or by providence, rather) happened to be in Florence today. I invited her to our concert that night and we wound up meeting up for lunch. We had an excellent chat about Catholicsm, teaching, vocations, and Fanta (how European Fanta is so much better than American Fanta). You might say European Fanta is Fanta-stic. Ha ha.  But don't worry, I didn't make that joke at our first meeting (didn't want to ruin my first impression, after all). I've read some of her blog, and she's read some of mine, and so it was kind of funny to jump into conversation with someone new when in a way you already knew each other but not really. After lunch we went to Eucharistic Adoration, which Meg had found in a church earlier that day, which was exactly the thing I needed. Before leaving our separate ways, we made sure to get a selfie:

The concert at San Stefano that night went pretty well. The students are all really excited and high strung, which makes it difficult for everyone to focus, but that kind of challenge is what makes these things so much fun. I was having such fun singing in this beautiful choir, and I smiled so much during this concert (despite a few rocky pieces). I can't remember smiling that much during any performance. Usually I am so serious. Well, I guess I was still serious, but I was able to let some of what I was feeling shine through. Sometimes I can't believe that I get to sing in such a talented choir, singing the music that I love to sing, and performing it in the context in which it is meant to be performed (the liturgy).

Here in Italy, meeting old friends and new, old saints (and perhaps some new), praising God in song, I have much to be grateful for. 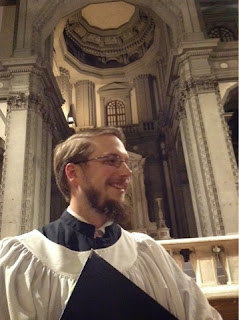