So, after many months, I am returning to Italy.  I think I alluded to this return in the blog previously.  The Madeleine Choir School, the only coed Catholic choir school in the United States, goes on a performance tour/pilgrimage every four years to Italy (with tours to other foreign countries every two years in between).  This being my fourth year in the choir, it is the first opportunity to sing there.

One thing that worked out pretty well is that all the great northern Italian cities we had to pass by on Belloc's Path to Rome are cities I'll get to see on this tour.  We start in Venice, then we stop by Padua, then a stay in Florence, then a brief stop in Assisi (where I think we get to sing in the Basilica of St. Francis), and then on to Rome for the final five days.  There we get to sing in St. John Lateran and St. Peter's Basilica (for Sunday Mass, too!) among others.

Right now I am in the airport in SLC waiting to head to JFK in New York, simply hoping I can get some sleep on the plane after a late night of grading, last minute classroom and sub preparation stuff, and packing.  It wasn't technically an all-nighter, but it was close.  And I'm sure that it will be worth it.

I'll hopefully be posting from time to time while in Italy, and if you want to see more pictures than you can see here, you can check out my Instagram.  My username is just lukestager. 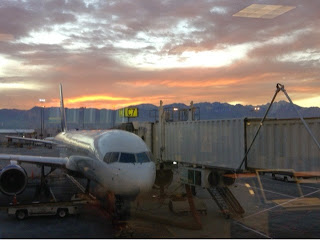