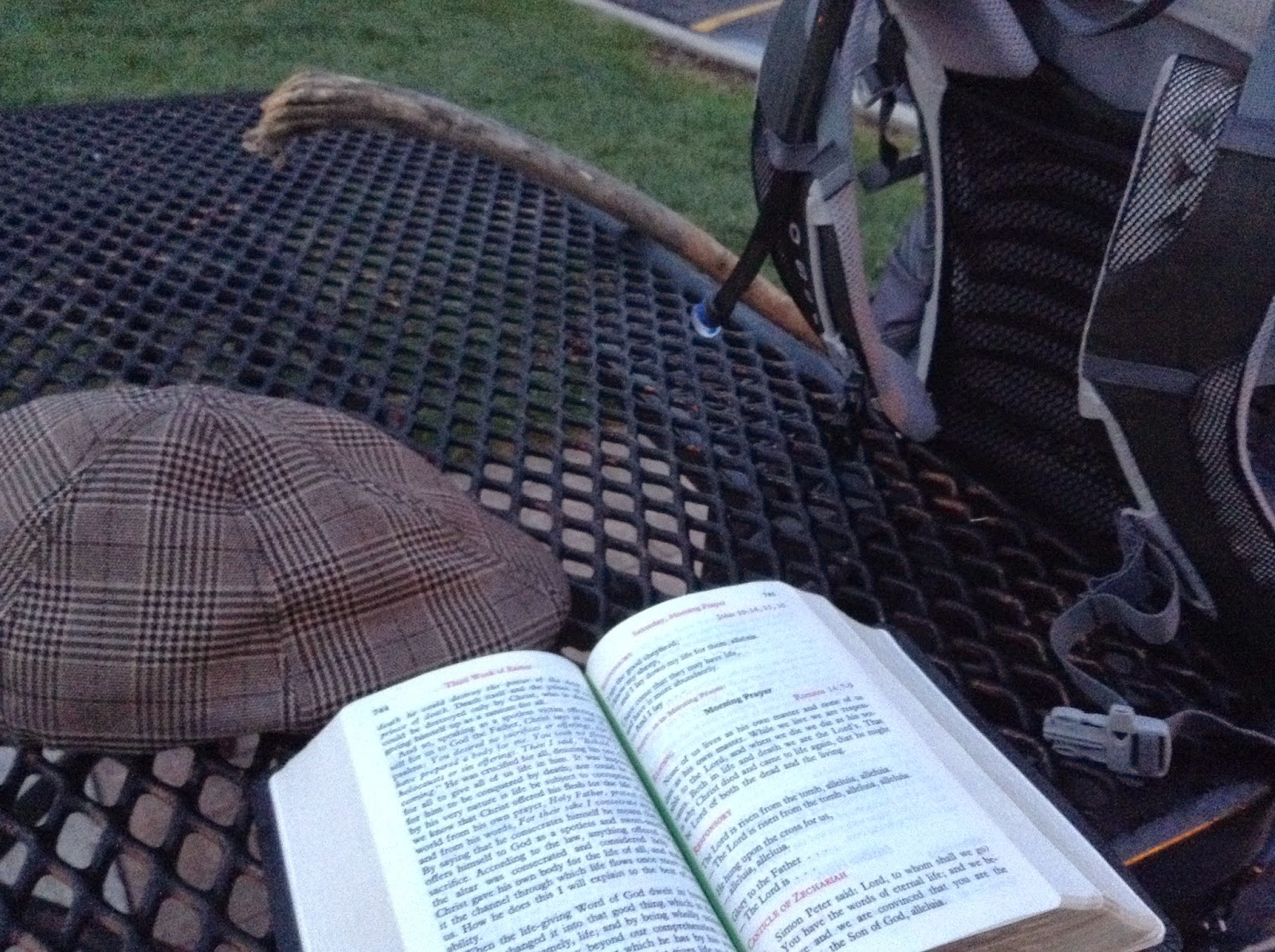 When Belloc made his journey so many years ago, he made several vows, one of which was to walk no fewer than 30 miles a day.  If I remember correctly, he does not quite fulfill this vow (in fact, he only fulfills one of the vows he takes, that of arriving in Rome on the feast of Ss. Peter and Paul on June 29).  Nevertheless, Ed and I may wind up having to walk 30 miles a day on many of the days, so I thought it would be a good idea to prepare myself for the physical and psychological onslaught by trying out a 30 mile hike, though walk or trek might me a more suitable word than ‘hike.

I determined that I had to complete this hike on Saturday May 10, because it was the only day in my schedule that I did not have at least one obligation to attend to, and I knew I would need the whole day to walk that far.  Knowing that a 30 mile trek was likely to be mentally taxing as well as physical, I decided that I would not walk 15 miles one way and then turn back.  I wanted to start in one place and end in another.  I also decided that I would want to end at home rather than start at home, arrive in a place, and then need to be driven back (though I would have to be driven to my starting point).

After playing around with Google Maps for a little while, I determined that it would be about 30 miles from Park City to Salt Lake City.  In the spirit of the Path to Rome, I decided that it also ought to be a pilgrimage.  I therefore decided to hike from St. Mary’s Catholic Church in PC all the way to the Cathedral of the Madeleine in SLC.  Both churches have some significance for me, the latter obviously because it is my parish and I sing there with their beautiful choir, and the former because we have our faculty retreat there and it is where my roommate and his fiancé will be getting married this summer.

This is the route that I mapped out: http://goo.gl/InO4f0

I was determined to incorporate camping into this trip so I could test my one person tent and practice getting gear in and out of my backpack for setting up camp.  So I decided to have my roommate drive me out to St. Mary’s the night before and then find a place to camp nearby where I wouldn’t be arrested or eaten.  My roommate dropped me off and I said a prayer before the church doors that I might find a place to camp.  After searching only a little while, I came to see what had looked like open fields on Google Maps were fenced in private properties.  The only place open to me was the church (symbolic, perhaps).  The property is rather expansive and I found a nice flat patch of grass behind a tree far enough from the highway not to be noticed if you weren’t looking for it.  I stored my food (what little of it I had) far away from camp in another tree, in case there were hungry critters about, and I set up my tent and sleeping bag.  It was cold but not unbearable.  I fell asleep pretty quickly.  Unfortunately, the cold became more unbearable during the night and I finally realized the importance of having sleeping pad.  The ground was very cold, and as a result I could not fall back asleep.  It was 3:35, only 25 minutes before I’d set my alarm anyway, so I began groggily to pack up camp, which took me about 45 minutes.

Before setting out, I went again before the church doors and prayed.  Like a knight with his sword I knelt with my walking stick and prayed for a successful pilgrimage in reparation for my sins and for many other intentions, seeking the intercession of St. Aloysius Gonzaga and St. Gemma Galgani, two of my special patron saints. 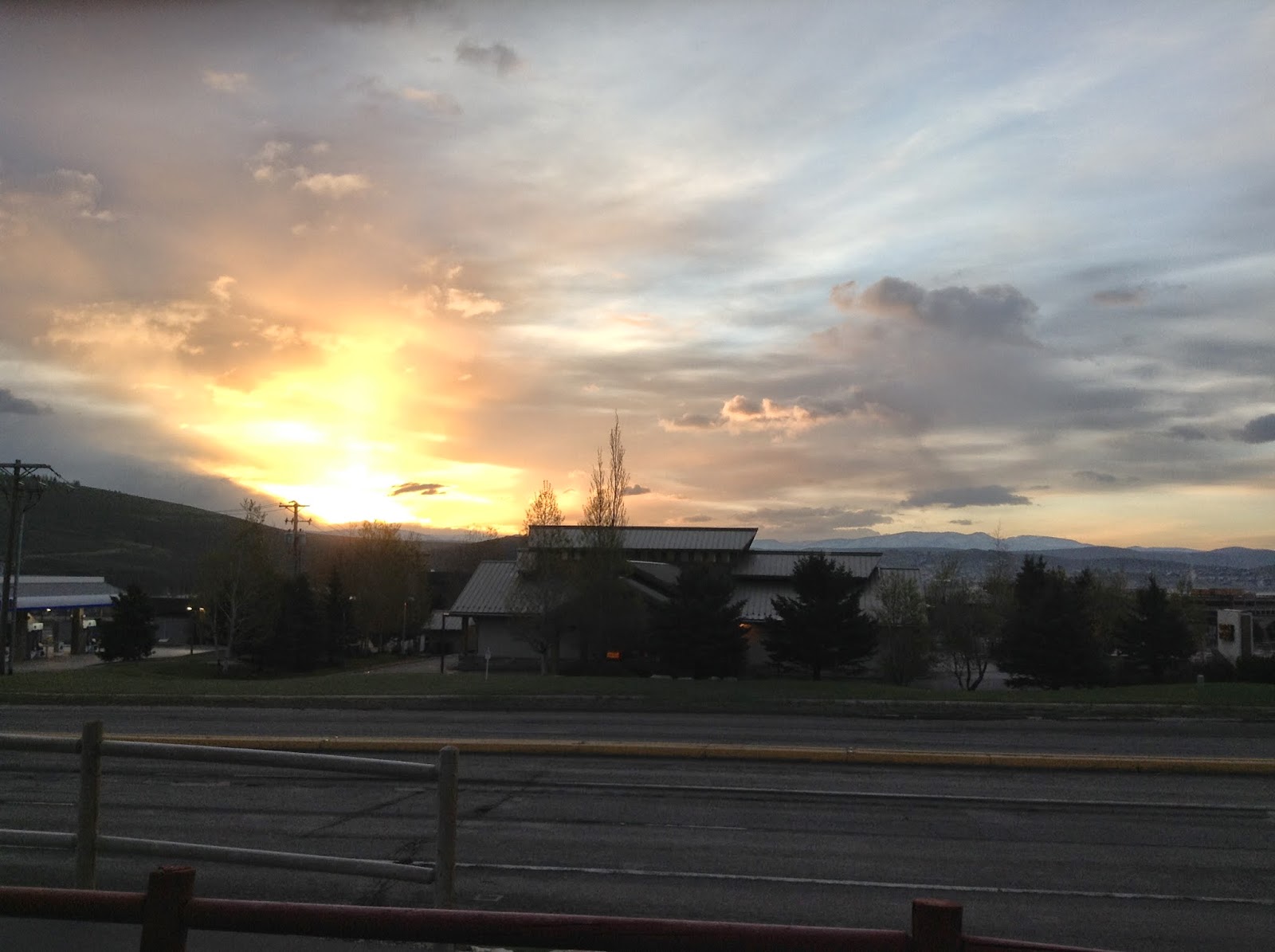 I began walking at about 4:25 AM.  It was still night, and somewhat dark, with only the street lamps and headlights to help me at times.  When I got to the I-80 Junction, I stopped at McDonald’s for a coffee and to use their free WiFi and to pause and watch the sunrise.  I prayed the Office of Readings and Morning prayer while awaiting the dawn.  It was about 6 AM at this point.

Then began the bulk of the walk.  For a while, I walked on a road parallel to I-80, until eventually a path went into the mountains, which I needed to take to make my way eventually to Emigration Canyon.  Things were going pretty well.  My pack seemed to be working out pretty well, and my feet were resilient in my new boots.  Clouds hovered but did not break except for a few sprinkles.  The hike in the hills was nice because I felt more removed from civilization (though I was not far at all from it).  I followed the gas line for a while because it was clearly marked, but it did not follow the contour of the hills; it went in a straight line, ascending and descending as needed.  This was rough on the feet and on my resolve having to up and down these very steep climbs repeatedly.  Eventually I took a shortcut to meet up with the path I was supposed to be on.  It was one of the few shortcuts I’d ever taken that was unequivocally successful.

One thing I noticed on this trek was that there is a significant degree of mental anguish on hikes like this.  It just keeps going and going and going with no end in sight.  I’ve felt glimmers of this while running, but at least it’s over in an hour or two (two hours being the most I’ve ever run).  But this was worse!  Walking and walking and feeling like you are making very little progress.  When I got to Emigration Canyon finally, I kept waiting for Ruth’s restaurant to show up, and it wouldn’t reveal itself.  I already knew it was quite some way up into the canyon so the trek beyond it would be long as well.

After finally reaching Ruth’s and resting with a little snack, I began the final part of the journey.  I did not stop for a long rest until I got to my destination, the Cathedral.  It was in this final leg that I finally felt the physical toll.  My shoulders and hips were hurting from the weight of the pack and my speed was greatly reduced.  The mental anguish worsened because I knew I wasn’t going as fast as I wanted to.  But despite the pains, it was a beautiful day with many beautiful sights.

But eventually I did reach the Cathedral, kneeling before its doors as I had done that morning at St. Mary’s and saying the same set of prayers.  Upon entering the church, I saw that Mass was going on, so I remained in the side chapel, saying Vespers silently.  Fr. Martin saw me and spoke with me (wondering at my large backpack and strange outfit (since he normally sees me in suits)), and after telling him about my journey, I asked him if I could light a votive candle for free, since I didn’t have 50 cents.  He said yes, and I lit a candle for my intentions, that my prayer might remain a little while longer after I’d left.

And so from there, I hiked from the Cathedral to my house, which put my mile total at about 31.  I’d gotten to the cathedral at just after 5:30, so it was just over 13 hours to walk 30 miles, which is a little over 2 miles an hour.  Not bad, but I don’t know if I’ll be ready to do that every day for a month.

The next day, I was sore but happy.
Posted by Luke Stager at 2:50 PM