My friendships are made of LEGOs

It is 1:25 AM on a Monday night as I begin to write this post.  Perhaps this is due to the cup of coffee I had after dinner, but I didn't think it was that strong.  No, most likely my insomnia is due to my incessant pondering over all things nostalgic.  As I've established in other posts, I am constantly thinking of old memories.  I guess this is because I glean so many ideas and draw so many conclusions from my memories.

Tonight, I was thinking of old relationships, not so much romantic ones as just simple friendships.  As a seminarian, I have much more motivation and time for reflection, and I often find myself considering important people at various stages of my life and how those relationships have grown or faded over time.

On a few occasions recently, my mind has been drawn to a few relationships/friendships in particular, and in these cases, I have virtually no contact with the person anymore.  In fact, in one case, the person even defriended me, as I discovered today when I was searching for something they'd written on my wall a long while back. (this is probably what caused me to ponder so heavily on the topic in the first place).  I don't know why this shook me up so much, maybe because I've never defriended anyone before.  This person and I used to have such lengthy facebook message conversations.  How does it happen that you can share so much with a person and then never see or talk to them again?  I mean, I know this is a part of life, so I guess it makes sense.  After all, people come and go in and out of your life all the time right?  It just seems strange to pour so much of yourself into a relationship and then never return to it.  In another case, I had a friend I used to talk on the phone with all the time but who I hadn't talked to in a long while, and I called a couple of times over the course of a couple of weeks to catch up and left voicemails and received no response whatsoever.  I mean, I guess we weren't super close, but I still couldn't help but feel this was a large blow.  Maybe it's a fluke, maybe they have a new number, but it still doesn't feel particularly pleasant.

Now, I know that relationships and friendships do indeed come and go, and I also know that in a lot of cases it might not even be wise to remain friends with someone if you believe they are being inauthentic or are influencing you in a negative way or whatever the case may be, and I know that most relationships do fade over time.  I mean, look at childhood friendships.  I have quite a few childhood friends I could point to who I haven't really talked to since middle school or high school, and I guess by some people's reckoning, those relationships would be over now.

I've often heard the simile that friendships are like plants: that you have to water them and take care of them or else they will die.  Okay, I guess that's a pretty valid simile that appears to be true in real life.  And it can even have a positive aspect to it because the plant returns to the soil and gives life to a new plant maybe or that the experiences of the previous friendship become the nutrients in the soil from which the new friendship derives its strength.  But in my rumination tonight, I realized that I actually think of relationships completely differently from that, which may point to why it seems so much harder to think of friendships that fade away.

I've decided after my reflection tonight that I see friendships as being more like they are made out of LEGOs (MegaBlocks if the friendship is really superficial and flimsy, ha ha).  A friendship is a LEGO set that you are building together.  You lay out the baseboard or the floor of the hull of your ship, you start building a foundation and walls, and then you decide together what kind of world you want to build and who it is your minifigures will be.  In this respect, I have a lot of cool 'LEGO set friendships.'  Now that I think of it this way, it's kind of fun to imagine what each of my LEGO sets would look like with each different friend of mine.  In some cases, even a whole friend group might be working on a particular LEGO theme together.

The key difference between seeing friendships as plants and as LEGO sets is that a plant will die after you don't water it for a while, but with a LEGO set, it will remain the way it was left permanently (though perhaps with a little dust in places).  It's the kind of friendships about which you would say, "We haven't seen each other for months, but we picked up right where we left off."

I guess this is why it's hard for me when friendships 'fade away,' because in my mind they really haven't faded away at all.  I see the LEGO set still sitting there, waiting to be built up, waiting to have an active imagination give it a story to make it come to life again.  For some sets this will indeed happen.  There are friends I don't see for months, sometimes for years, but when we see each other again, we 'pick up where we left off' and add even more to the LEGO set.  But there are some, as described above, where it appears the friendship has pretty clearly ended.  And it hurts to know that those sets will never be completed, that those sets will collect dust like so many others.  I suppose I could dismantle it all and put the pieces away, but why would I want to dismantle something so great I'd begun to build with someone else?

And now, concluding the composition of this post at 2:45 AM, this whole LEGO friend reflection seems pretty interesting to me, but I'm not really sure what conclusion to draw from these scattered ideas.  I guess it just makes me grateful for all the friendships I have and have ever had, regardless of how much of the 'set' ever got completed.  But the conclusion that you, the reader, need to draw from this is that if we have ever been friends, even childhood friends, then I still consider us so.  Your LEGO set is still here, and as such the memory of our friendship has never faded from my mind even if we never talk.  And should circumstances allow and should you ever wish to revisit what we had begun to create, I'd be happy to continue to keep building it with you. 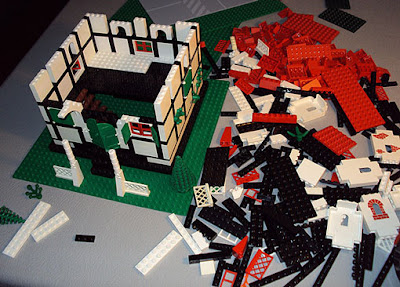