Four weeks have gone by (five, if you count orientation) since my life began here at Mt. Angel as a seminarian. My mind has been floating around to different ideas, but there is one idea that I would set apart and classify as a theme, something I've been reflecting on that has defined the beginnings of this journey and may come to define much more of it. To sum it up in a catchy phrase, the theme would be: "Don't Look Back."

As I've gotten to know myself over the last several years, I've learned that I tend to be nostalgic, and I mean very nostalgic.  There are few among those who know me who haven't heard me tell some story out of the past.  When I taught at St. Joseph's in Ogden, I was constantly talking about Portland and my time as an engineer.  When I taught at Judge Memorial in SLC, I was constantly talking about my time at St. Joe's.  And now, here in the seminary, I am constantly making references to my time at Judge as well as my time in the cathedral choir in Salt Lake (and still telling stories of St. Joe's and Portland as well).  I seem to always be thinking of some memory of the past or looking at old pictures, notes, or letters.  In every place I've lived, my yearbooks are usually given a prominent space on my bookshelves, and I actually open them up and look through them from time to time.

It would be accurate (though also metaphorical) to say that I am almost always drowned in a sea of memory.  My memory has always been something that is important to me, as I have a lot of obscure memories that are triggered by seemingly random things, and I think part of the reason I'm so nostalgic is because I am afraid of forgetting, of having to let go of those memories.

I think the reason I am so attached to my memories is the fact that I know that I can never 'go back' to the way things once were, and so the memories are all that I have left, the only things I have that allow me to go back, and if I lose the memory, it seems like I lose the experience along with it.  Before making any major life change, I always have the subtle fear: "What if I forget?"  The scariest thing for me is that you can never know that you've forgotten it.  What are the things I have forgotten?  I can't remember.  Alas.

When I was considering my first career change from engineer to teacher, there was a bible story that stuck out for me.  It was the story of the rich young man in Mark 10: 17-22.  During my days in engineering, let's just say I was in a financially good place, and though I felt my faith was strong, I could also perceive that perhaps God had something more in store for me.  There were many factors that led to me switching careers to teaching (and perhaps thereby avoiding the seminary for a few more years), but this verse was ever at the forefront as a sort of quasi-motto (since I don't think a whole passage can be a motto).  I never wanted my possessions to get in the way of doing God's will for my life, so I made the switch despite being a little nervous about leaving the security of a decent income behind.  Incidentally, when I worked at Judge, they had a print of the "Rich Young Ruler" by Heinrich Hoffman in the Campus Ministry Center.  I took it and put it in my classroom as a reminder of what I had left behind.


Now we fast forward to going to the seminary.  During my final summer in Salt Lake City, I had a really hard time knowing that I would have to leave behind so many things.  But it wasn't material possessions I was leaving behind, it was people and places and experiences and memories and the potential of adventures never to be realized that I was leaving behind.  I was very afraid of leaving all those people and experiences behind because I knew that I would probably not come back (at least not permanently), or that even if I did come back, things would never be the same.

Nostalgia is a bittersweet thing.  I love it because it helps me appreciate the things that have passed, and it also enables me to help other people remember and appreciate those things as well.  The problem with it is that it can make me ignore the present and possibly even fear the future.  I've had trouble leaving things behind in the past, and nostalgia doesn't make it any easier to do so.

I think the devil often uses our fears against us to keep us from doing God's will in our lives, but we must also be aware that he uses good things to keep us from God's will as well.  Turning our perfectly good desires and strengths against us is much more subtle and can be an even more effective strategy against us than using our fears.  And certainly, I've tried to be wary of letting my memories and my desire to not leave anything behind overcome my desire to do God's will.

As a result of this line of thought, my mind was drawn to another bible passage, which, again, I have adopted as a sort of motto.  If you'd like to read the full story, read it here: Luke 9: 57-62.  In the story, there are three would-be followers of Jesus.  I identify most with the third one.  Like him, I was (and am) afraid to leave things behind; I want to say farewell, so to speak.  But that last verse is so very important: "No one who sets a hand to the plow and looks to what was left behind is fit for the kingdom of God."  Scary admonition, no? especially for someone like me who looks back all the time.

At the same time, I have to remember that my nostalgia is something that I consider to be a strength of mine and that I should not let the devil use against me.  I discovered during the past couple of weeks here that my longing for the 'olden days' has actually shaped my spiritual life in a very positive way.  As usual, my mind has been wandering back to Utah, back to my old schools, and back to old friendships.  In the past, when I did that, I would just feel a little sad.  Now when I do it, I feel compelled to pray, and my prayer is invigorated!  I'll remember someone, and I'll think, "I must pray for that person."  And I do.  My memory is not something I need to shut down for fear of having it lead me away from God; it is something that I should embrace and temper (in the positive sense of the word) so that I may grow closer to God and to my neighbor.

Just yesterday, one of the higher-up theology students gave a reflection in which he quoted Thomas Merton, a great Catholic spiritual writer.  Actually, the quote was from his abbot to Thomas when he entered the abbey.  The abbot said, “There will come a time when you’ll want to leave, but when you feel this desire, take the time to remember all of the souls whom you brought with you here.”  This quote was the linchpin to what I'd been recently discovering about myself.  Even though I have left certain people, places, and experiences behind, I bring all those people and memories with me to the seminary, and I would make the argument that in many cases my relationships to those people are sanctified because now I pray for them much more extensively and specifically, and, really, while I offer myself up for the Church, I am aware that I am also offering myself up on their behalf: that I am becoming who God made me to be (ideally) precisely for their sake, not for my own.

In Portland, a few days before I was going to repack my car and head down to Mt. Angel, I was talking with a priest friend who was instrumental in my vocational discernment.  He was encouraging me about going to the seminary, and as we finished our conversation, he said, "Don't look back."  I was amazed at this since I had only chosen that special verse from Luke 9:62 a few days before.  I took his idea upon myself as a theme of reflection, but now I have added to it.  Yes, I will not look back; I will look forward, but not forgetting what was left behind: rather, keeping 'the souls I brought with me here' ever in the forefront of my vision as I make my way to what God has in store. 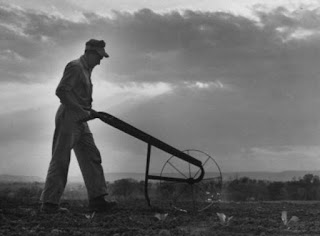